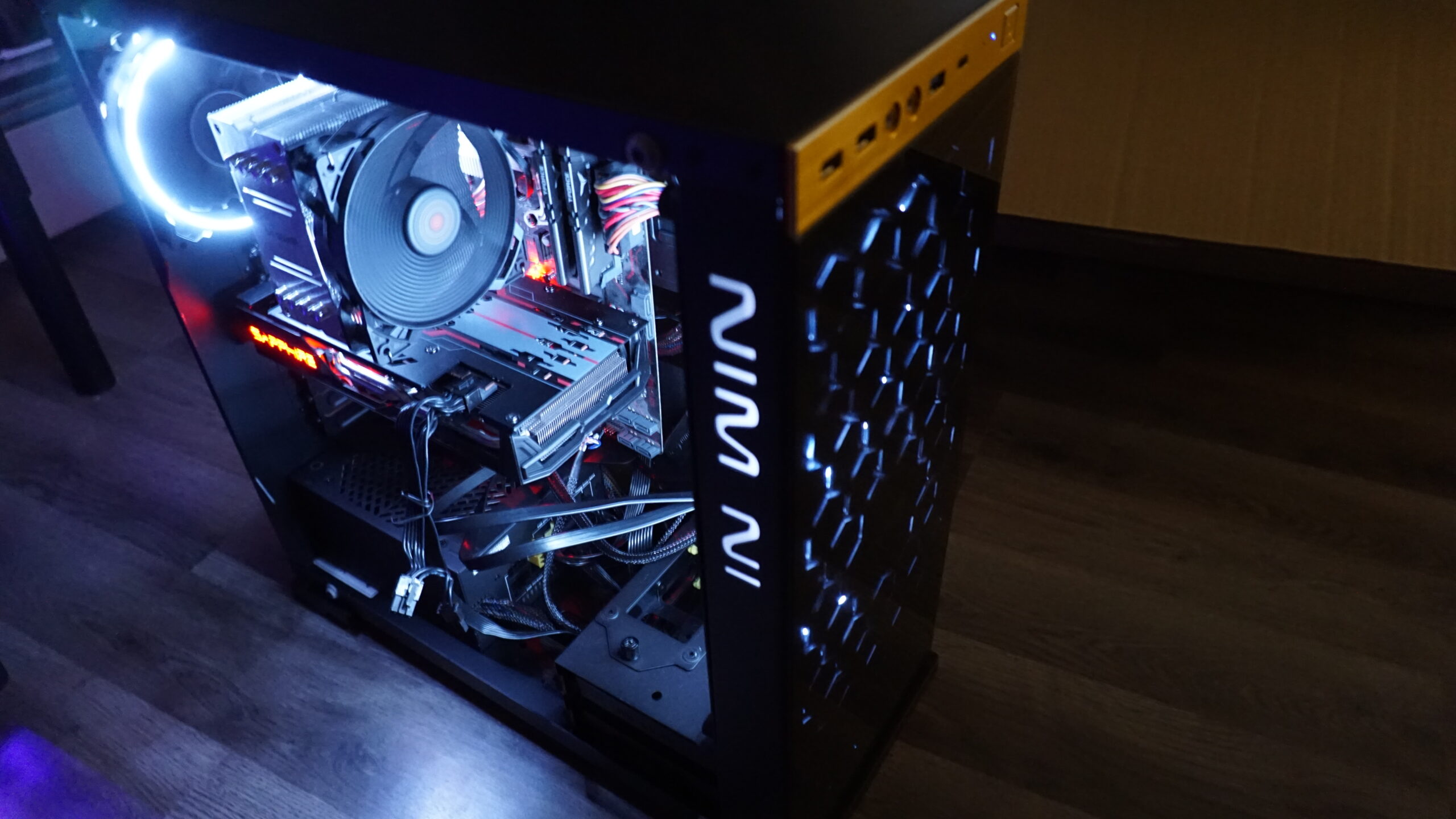 You may recall a review that Sonuchi did on the InWin 216, or the InWin Alice that I took a look at. InWin has set a trend of being functionally quirky and the 805 doesn’t stray far from that. There’s lots of tempered glass, a honeycomb inlay, and aluminum finish.

The InWin 805 comes well packaged with a very shock-forgiving foam exoskeleton. The box opens up a little less traditionally. It opens on one of the larger “sides”, revealing either the left or right side of the case instead of the top or bottom. In the box, you’ll find a clear plastic envelope that holds many of your extras like zip ties, nylon nuts, standoffs, and all the other creature comforts needed to pull off a build. Also (we found in ours) an included “popsocket-esque” headphone hanger; a bit of an oddity but appreciated.

Aesthetically, the 805 is a brushed aluminium and tempered glass setup. It would look at home in an office, studio or a home/computer room. The tempered glass is 3mm thick; InWin boasts “double strengths than normal glass.” It is available in black, red and gold — the latter being what we received. The “gold” however, in my opinion, is more of an orange, but doesn’t look bad. The tempered glass has a fair bit of tint, and the front I/Os are plentiful. On the front I/O panel you’ll find:

Inside the 805 is a mixed bag for me. On one hand, there isn’t a traditional basement or PSU shroud; on the other, the drive mounting caddy is versatile. It can be mounted on the deck or vertically on the front panel directly on top of on of the fan mount. The aforementioned lack of a PSU shroud does make it difficult to hide cable clutter, though. I suggest using a modular PSU to cut back on unnecessary cabling, and custom cables measured to the perfect length. Given its tempered (albeit dark-tinted) glass on both side panels, organizing cable management was a little difficult for me. Aside from this, building in the 805 is pretty easy. It’s spacious, with a build volume of nearly 43 liters.

Airflow might be the 805’s Achilles heel, however. It supports up to a 280mm radiator (two 140 mm fans), a 240 mm radiator in the bottom (two 120mm fans), and a 120mm radiator (one 120mm fan). The front panel is also tempered glass with a plastic honeycomb design back-laid on it. The front fan mounts position the fans just over an inch away, which could be enough. But the only intake vent to bring in fresh air in to the front of the fans is a 1-inch by 8-inch opening at the bottom. The rest of the air taken in from the bottom is beyond the front fans.

I’ve opted to run AIDA64 Extreme for my stress tests running three rounds at 30 minutes each. During testing, we found that our Ryzen 7 1700x running at 76°C was nearly 7°C hotter than an identical configuration that we did for our AIDA64 heat load test on the DX500, which was airflow optimized. To be completely fair, however, the marketing materials really emphasize radiator support so perhaps a liquid cooling solution with static pressure optimized fans would perform better.

Disclaimer: I don’t have a very scientific method for testing airflow. So what I did was to try the same fans in the 500DX, an airflow optimized case, and then again in the InWin 805. I took a piece of paper and taped it to the fans. In the 500DX the paper ‘streamers’ on each fan had considerable movement while in the 805, movement was negligible. This would seem to indicate that there was not much air being drawn into the case from the front.

My final thoughts on the InWin 805

The 805 by InWin looks great. It’s easy to build in, although there is the lack of a PSU shroud and air flow. With an MSRP of $150 I feel the price of the InWin 805 is a little steep, especially if one plans to do an air cooled build. Cost aside, it’s pretty spacious, and with a proper liquid cooling configuration it may be great. Have you done your own build in this case? Share your thoughts with us in the comment section!