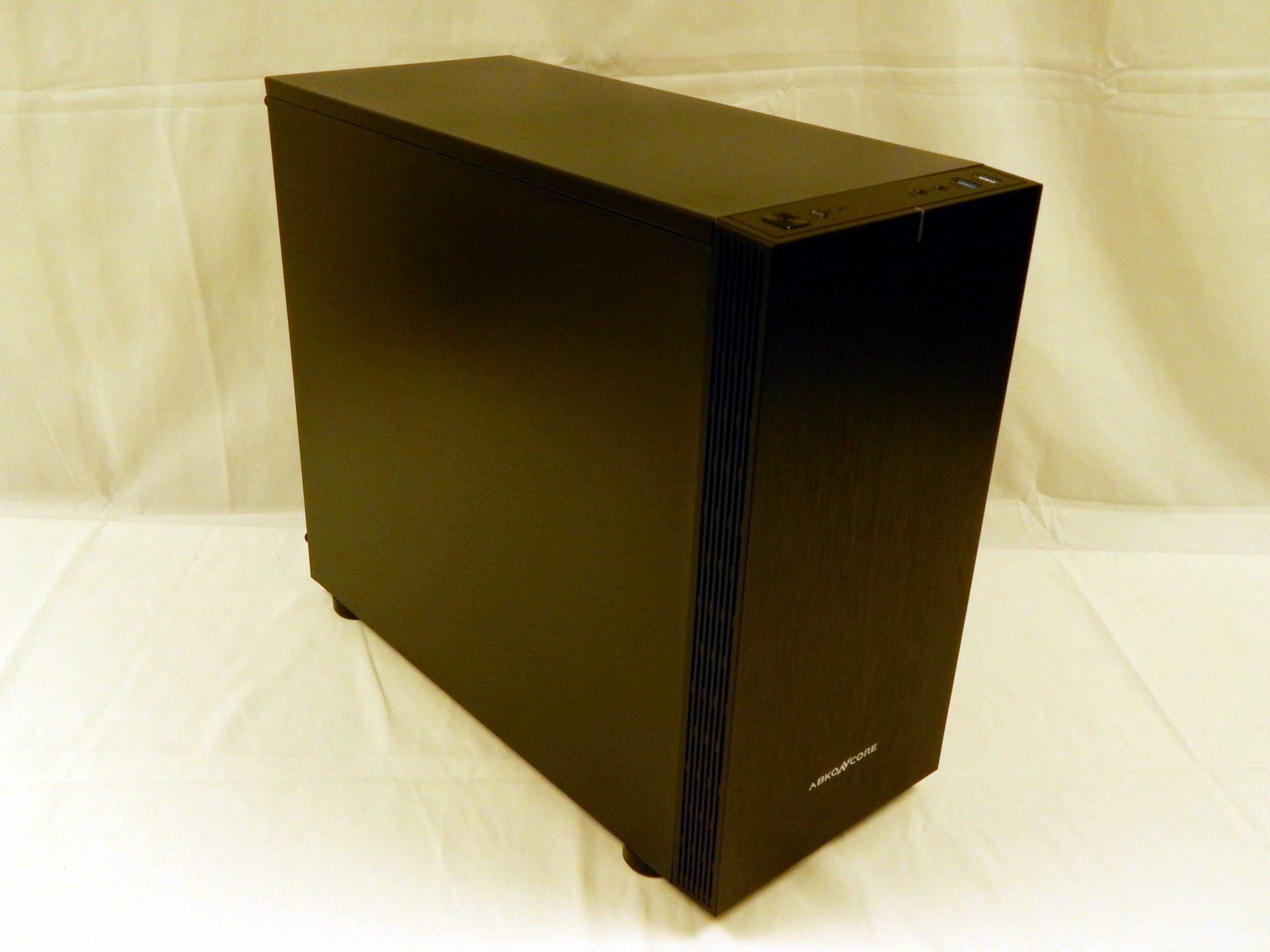 Update: The ABKONCORE Cronos Zero Noise Mini has been re-named the S300M.

Now, more than ever, home users and prosumers are producing audio and video content. While many have bright RGB cases with tons of fans and light strips, these rainbow gamer cases may not be the best choice for creators. Many of these shiny cases are loud, with setups made for internal aesthetics. The Zero Noise Mini maintains a sleek and clean design externally; internally, the goal is shifted towards reduced noise for the consumer.

While it may not seem like a big deal, any content creator with a sensitive condenser microphone can tell you how important reducing noise can be. You want your mic to pick up your voice, not your fans.

Compatible with both Micro-ATX and Mini-ITX motherboards, the compact design offers not only a smaller noise profile but a smaller desktop profile as well. Listed specs for size are 19.5cm x 46.0cm x 39.2cm, and it sits comfortably on my small IKEA desk.

The panels have a sound dampening adhesive layer and it seems to deaden the hollow feeling most steel case panels have. Due to the dampening material, the panels and case are a bit heavier than they would be otherwise.

A brushed style plastic front panel has limited airflow cutouts, but does have that sound dampening layer. Power and reset buttons, microphone jack, headphone jack, and two USB 3.0 ports are all on the top of the front panel.

The ABKONCORE Cronos Zero Noise Mini has room for two 3.5” drives, and up to five 2.5” drives.

There wasn’t too much planning when it came to the overall parts selection. The build is made from what I had on hand or whatever was available for a reasonable price to get it running.

I did notice some whine from the stock 140mm case fan included with the Cronos Zero Noise Mini. That was just fine, though. I ended up swapping the ABKONCORE 140mm fan for a BitFenix Spectre 140mm fan just to check the noise difference. While the front 140mm fan could also have been replaced with two 120mm fans, I wanted as close to stock as possible for testing.

I tested the system using the UNIGINE Superposition stress test. Noise testing was done at the 20 minute mark using a free app on my cell phone at a distance of 3” all around the case. Although it isn’t the most accurate test, I believe it was very close, based my own opinion of the sound levels and the relative accuracy across a few tests.

While the BitFenix fan was only marginally quieter to the factory fan, it did eliminate the high pitched whining noise. My own personal desktop comes in at almost 50dB at idle using the same test parameters, making a noticeable difference in sound levels.

The case itself impressed me with its ability to move air well enough to even accomplish a minor overclock using MSI Afterburner’s OC Scanner tool within safe temperatures.

With a 25 degree Celsius ambient temperature, the temperature tests were all performed using the highest temperature recorded in HWMonitor during the above stress tests. Considering the case is intended for noise reduction, temperatures were well within acceptable range. Based on my testing, I believe the ABKONCORE Cronos Zero Noise Mini was designed with enough airflow for at least mid-range gaming hardware.

I would have liked a bit more of an opening in the front panel, but the parts stayed cool enough.

The case came with everything needed for the build; however, the factory front 140mm fan needed replacement due to whining.

With flat cables, cable management was a breeze. I would have liked more tie down areas but it was easy enough. Thick, round cabled PSUs may not do as well.

Everything installed without issue. Cable management isn’t much of a worry either, without a windowed side panel.

The case did a great job of deadening the noise from the interior parts, including an extra fan and a blower style GPU.

There is plenty of room for more drives and larger graphics cards. This isn’t going to be the best case for a NAS build, but great for an average consumer build. The addition of a 240mm front mounted CPU cooler might impact 2.5” drive and GPU placement.

Overall the build quality of the case was fantastic; however, I dislike the “break off” style expansion slot covers.

Despite having no window, the case looks great. Not everything needs tempered glass and RGB fans. A simple, but clean, design goes a long way.

Personally, I enjoy the clean look of the case and the lower noise levels. Unfortunately with the case I received, I did have to replace the front 140mm fan to eliminate some noise and whine. After changing it out, the case was barely audible over ambient noise during stress testing. It fit all the parts just fine and did a great job of maintaining reasonable temperatures throughout the stress testing. There is even room for some expansion in the future.