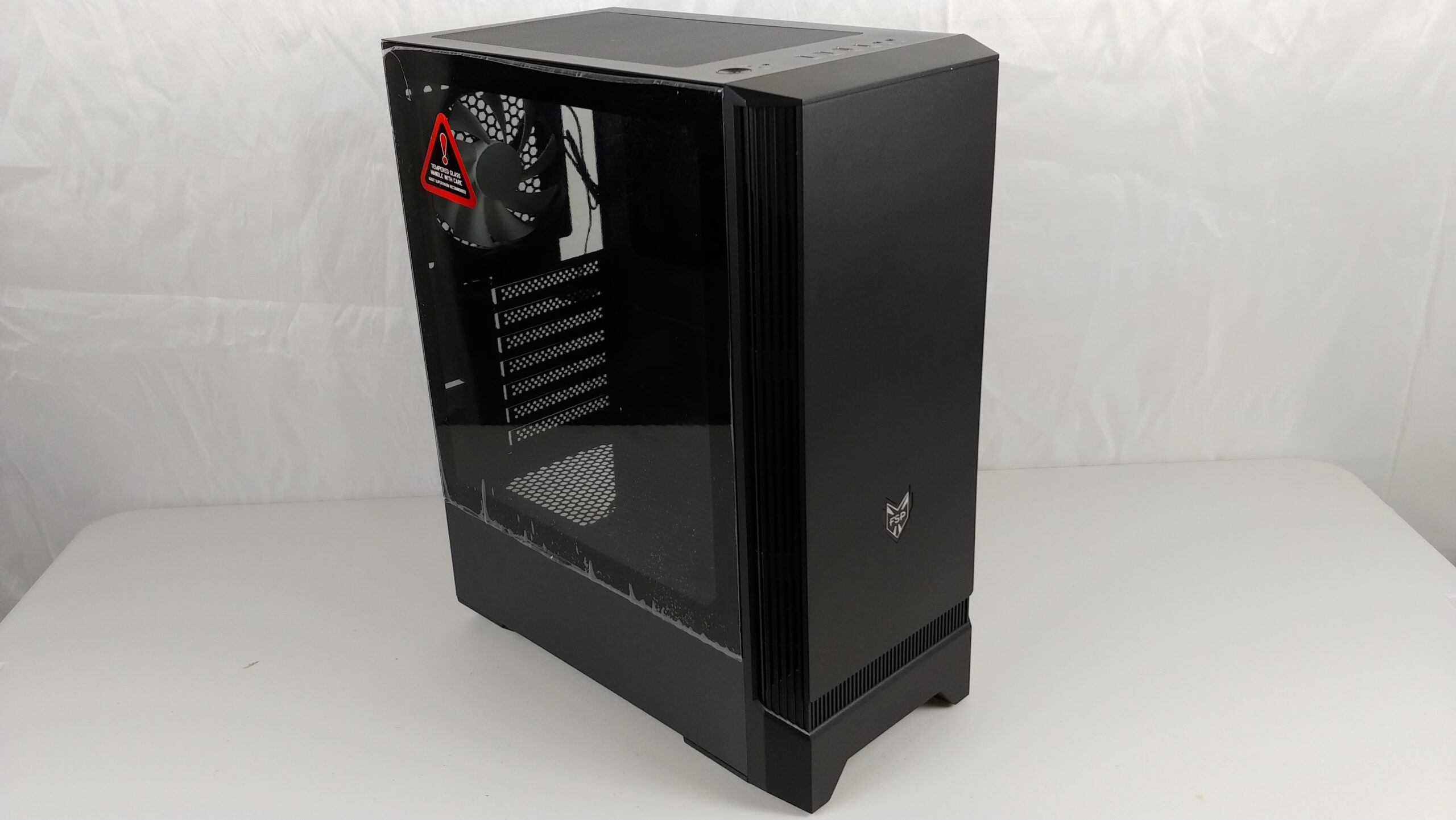 The CMT260 by FSP: An Entry-Level Case

FSP recently released two entry-level cases, and we had the opportunity to review the CMT260 model. Therefore, I was able to take away a few good things that I could compare against the CMT340 with regard to features.

The FSP CMT260 is an ATX mid tower; all black steel design with a plastic front face. The detailed specifics are:

The FSP CMT260’s front panel is plastic, with no I/O panel attachments, thus making removal simple by pulling at the bottom of the panel. It is vented on the side edge and on the front face to allow airflow from the front of the unit. The vents run from top to bottom. Behind this panel, there is a magnetic dust filter covering the three 120 mm fan slots.

On one side is your standard plain black panel which hides the cables, PSU, and drive bay. The other side is a tempered glass panel engineered to slide open, rather than directly outward. This is similar to the CMT340 case I reviewed back in February. It’s a nice change, compared to the tempered glass you just put in place with four screws.

The top of the FSP CMT260 has a magnetic dust filter with room for your 240 mm water cooled radiator or two 120 mm fans. Also at the top are your USB I/O ports, power button and HD audio ports. Furthermore, I found these rubber covers in the accessories bag and had no clue what they were for. For instance, there were no details in the manual regarding these caps. However, I took a closer look at them and decided to test one out by placing it in the USB port I/O. Lo and behold, it fit perfectly. So these are most likely dust covers for the USB ports.

The back of the FSP CMT260 comes with your standard layout: an I/O shroud slot, 7 PCI slots, one exhaust fan, and a PSU area. In addition, FSP took some of the features seen on their CMT340 and put it on the CMT260. In this case, we see the PCI bracket cover that is similar to the CMT340. But the nicer thing with the CMT260 model’s bracket cover is that it adjusts with one screw compared to others with two, and that helps a lot!

The CMT260 has feet installed on the bottom to allow for airflow space. The PSU area also has a dust filter, similar to the CMT340, with a simple mesh placed in a slotted spot at the bottom of the case. It’s a bit tedious to remove, although not uncommon for an entry-level case like the CMT260. But it does make me wonder if the design should have been different on the CMT340.

FSP designed the CMT260 with a smaller chassis, which helps if you’re limited with space, but this also had me reconsider positioning components when installing them. The FSP CMT260 supports ATX, Micro ATX, and ITX boards, although it’s just at a bit snug for the ATX boards. Not only that, there are two SSD mounting areas to the right of the motherboard.

On the opposite side are the drive bay and PSU area. The drive bay allows 2.5 and 3.5-inch drives, but it can be easily removed by unscrewing it from the bottom of the case. This helps for those who may not have a modular PSU, for instance. Or for those who just want a bit more space for cable management.

Building in the CMT260

The FSP CMT260 does not come with a mounting bracket for the PSU, but it’s fairly easy to install the power supply. I was able to get my older non-modular PSU in, despite the cables taking up a lot of space. But, as I mentioned, the drive bay is entirely removable. Doing this opened up space that I wasn’t otherwise using. Removing the bay wouldn’t be necessary for a modular PSU, however, unless you really wanted the extra space.

The CMT260 is ready out of the box for Micro ATX boards, but you will have to screw in the additional standoffs for ATX boards. Once the standoffs were installed, I got the motherboard into the case with no problems. When I attached the I/O cables, I did have to run a few of them around instead of directly underneath the openings to avoid putting a kink the cable. This also goes for the 24-pin power cable from the PSU, as well.

The PCI bracket easily slides up to allow installing the graphics card, but you have to break off the slot covers that are welded/attached to the case. This isn’t a big issue since you use the slot most of the time. However, FSP does provides two slot covers that you can put in place when not using the slot.

During this build, I used a 2.5-inch solid-state drive and installed it on the right side of the motherboard. There are cutouts alongside the SSD mounting area to bring the power and SATA to the SSD without exposing the cables. I tried to find a good way to mount it without bending the cables in a weird way but realized after installing the SSD that, with the depth of the case being a bit more shallow, the fans actually overlap the SSD. This is a good reminder to figure out where the drive should go before installing the SSDs and fans.

Final Thoughts on the FSP CMT260

The FSP CMT260 is priced at $54.99 at the time of this review. That’s quite a deal indeed for a entry-level case and the features it comes with:

I did need to consider how to mount hardware in order to make it look nice without cables running all over, but I managed. Still, it’s not a major issue by any means; rather, just something to think about when looking at purchasing FSP’s CMT 260.