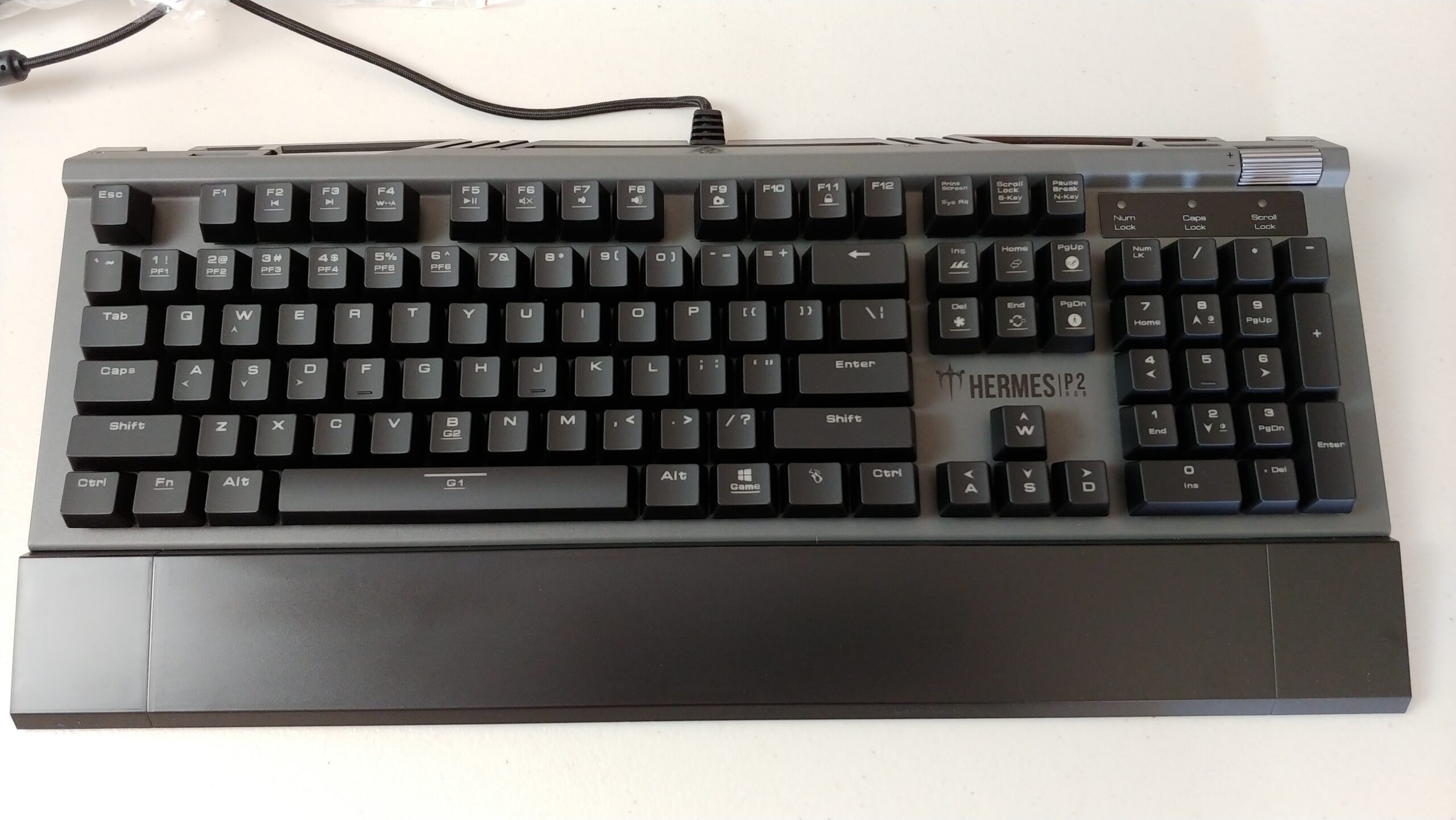 As a PC gamer for over 20 years, I’ve always stuck with certain brands throughout my time in front of a monitor. I have had very little wiggle room to consider other brands. That’s changed over the these past few months, since I’ve had the opportunity to try out the Gamdias Hermes P2.

I sported the Logitech G810 Orion Spectrum prior to the Hermes P2, so we’re going head to head in a comparison with these two. Now, I’m going to take a slightly different approach to this review. Not only do I use my keyboard for gaming, but it also drives my everyday use and, with this whole pandemic, my work-from-home duties.

Taking the Hermes P2 out of the box, the keyboard has weight to it like most mechanical keyboards. It also had a wrist rest that is not detachable. I initially planned to use keyboards without a wrist rest due to space and comfort, but the Hermes P2 had me thinking otherwise after using it for a month or so. It doesn’t take up much more room than the Logitech G810. While it did aid in my typing, I still feel wrist rests should be an optional feature.

This version of the Hermes P2 keyboard comes with brown optical switches that can be removed and swapped with other optical switches. Along with the brown switches, it also comes with a tool to help remove said switches. The brown switches felt almost similar to Logitech’s G810 Romer-G mechanical key switches. They are both tactile and fairly responsive. The only thing I could challenge the two with would be the durability in keystrokes, but we won’t sit here for 50 or 70 million keystrokes. Throughout my weeks of using this keyboard, there has been a noticeable difference in typing and gaming compared to Logitech’s G810 keyboard.

The Hermes P2 feels like a keyboard designed to handle most things without additional software. The onboard features are:

I can see great benefits with these features, but I kept the same RGB configuration and did not require those keys for this configuration. Had I played some real-time strategy games, I could see a real need for the arrow/WASD key swap. Additionally, I listen to music often, so having to press the Function key in order to skip to the next song or stop the music became a little tedious.

Unfortunately, I didn’t find a workaround since the software restricted changing the Function key. There is a counter-argument with the left Windows key: it gets pushed accidentally while playing games. While this is true, I did not have this issue, since the Logitech G810 solves that by allowing players to disable the left Windows key and I was already used to that. Eventually, I adjusted to this new change. Although, if the software allowed me to add a Win key somewhere else, I think that would make the Hermes P2 more appealing to me.

The Hermes P2 is compatible with Gamdias’ Hera software, which you can download at their website. After installation, the software detects the Hermes P2 and you’re on your way to configuring macros for the two ‘G’ keys, reassigning keys, and creating sounds and timers that you can assign to keys.

Macros for the P2

One feature that is really nice is the Macro setup and the instant macro recording ability on the keyboard. Pressing Fn+F9 activates the macro recording feature. Once activated, you can press whatever keys you need in keystroke order. When you’re done, press Fn+F9 again to save the macro. Depending on the settings in the software, the macro can detect the delay between your presses or default it to whatever millisecond delay you want. This allowed me to set up a macro I use for Call of Duty: Modern Warfare to confirm my Warzone purchases without having to move my mouse.

The G’s in those Keys

One thing I would have preferred to see is the option to place the G-keys where you want. The B-key and space bar are the only two G-keys on the Hermes P2. Some may say that 2 G-keys are not enough, and they might be right, but I think that placement also makes a big difference. Additionally, I feel extra key commands, Fn+G1/G2, increases the time to execute a macro you created to run quickly. Removing the extra key and allowing macros to be mapped on a different key would help this a lot.

Let There Be Light

This doesn’t include the custom patterns you can configure along with the keyboard profile you choose for specific games. The lighting effect is quite a treat, but I feel they are slightly dimmer than the Logitech G810 even at 100%. I think if you’re looking for RGB, you’re looking to blind yourself at max brightness. Bumping brightness drops by 20% each time, giving you 6 different brightness’ with 5% as the lowest.

As I mentioned earlier, the Hera software has a unique feature: sounds and timers. I’m trying to wrap my head around what uses I could have for them besides countdown timers, that show up on your screen, and soundboards. I played around with it for a bit but I don’t think it was something for me. It definitely adds value for those looking to utilize that feature and I must say that although it’s a feature I’ve always wanted, I have been able to find a different way of getting it.

Gaming in Style with Hermes P2

At the time of this review, the Gamdias Hermes P2 RGB is priced at $163.99. The price could vary depending on the switches you go with and with the pandemic price gouging going on, but this keyboard can put up a fight with the competition. A few takeaways are that I did have to hit an extra key to enable media and G-keys, but at least they are there, unlike other keyboards.

Lastly, you have a handful of onboard features that do not require software and if you do install the software, you get the RGB lighting effects, timers, sounds, and software or game profile selections. You also have solid keys, a solid build and the ability to change out the switches extends the life of this board for years to come. Just as long as you don’t throw your keyboard out of frustration. I started off clunky with the Hermes P2, but ended up opening up and enjoying it as my everyday keyboard. This will be in my arsenal of devices moving forward.

One response to “Hermes P2 RGB Keyboard by Gamdias”