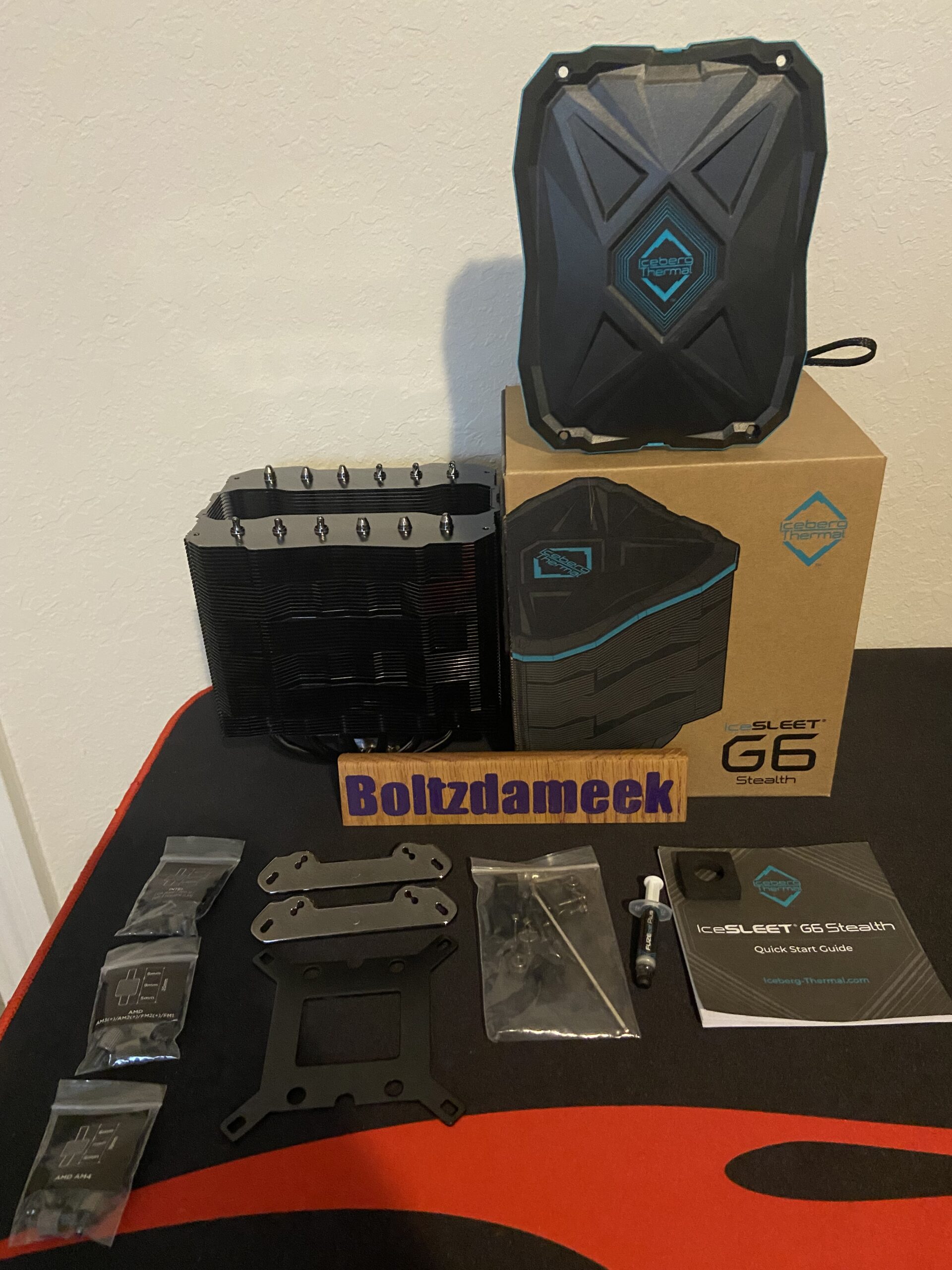 The Ice Sleet G6 Stealth CPU cooler is the “muscle car” air cooler of 2022. I mean, when I opened the box and saw how big the fan was and the dynamic designs, I was ready to see the horsepower this cooler was going to put out. Each blade had me smiling and turning the radiator around like a kid with a new toy! I unboxed this thing like it was my birthday.

The thing that stood out the most to me was the surface; I saw my reflection in the black nickel-plated awesomeness. The pipes coming out to connect where your CPU will be installed brought back my hot rod cars I use to collect as a kid. You will love the muscle car feel and look of this air cooler.

The heatsink is a block with 57x .04mm thick aluminum fins, with a beautiful direct-touch heat pipe included. The black nickel-plated surface will catch your eye and complement the other components in your case.

The Ice Sleet G6 Stealth also come with a 10-year manufacturer’s warranty and the quick-start guide.

The heatsink itself weighs a whopping 1080g, which is fairly dense for a CPU heatsink. The included mounts support the following sockets:

The included hardware with the Ice Sleet G6 allowed me to install the heatsink to my i9-12900KF and the instructions were easy to follow.

I tested 4 games at the same time for about 35 minutes just to see if the CPU fan could keep my system at a reasonable temperature. Let’s kick it off by saying it was a success because I didn’t blow up my rig and I’m happy with the results.

[Editor’s note: This is not a real-world test scenario, and is a bit extreme. Although we were pleasantly surprised by the results, we do not recommend replicating this test. This cooler’s performance is outstanding, but running your cpu at those temps for a long time carries a risk of potentially overheating and damaging your components.. ~Ed.]

Final Fantasy XIV was rocking the good FPS until I got brave and did a dungeon. Good thing I was a healer and not DPS, because my frames dropped by half during the boss battle with all of the fireworks going off with each spell in the party. There wasn’t a drastic change in the temperature, though. So the fan did its job during the big fights.

As we know, in Black Desert, we can do the AFK fishing. The FPS was actually showing higher there and then dropped around the bigger crowd of people, but the temperature was consistent.

Guild Wars 2 had the highest FPS, and the temperature stayed consistent.

Here is a screenshot of all 4 games being run at the same time, along with my Spotify music going, and using Fraps to capture the game FPS:

Unfortunately, Tower of Fantasy will not let me capture it due to an error popping up stating that Fraps will crash the game.

As you can see, it hit a steady 60ºC. It actually bounces up and down while I use just one of the games to move around in a highly populated environment.

In the image below, I’m in a heavily populated area. The frames are still close to 65ºC, bouncing from 62ºC – 76ºC. When I do a snip of the FPS, it drops when clicking outside of the game:

The temperatures did run pretty hot when I was in a dungeon, spiking all the way up to 60ºC. I maxed out the fan speed in hope of keeping it cooler for the time I allotted to testing. Now remember – I’m running 4 games that demand a lot of CPU. But (and I mean with a capital “BUT”) I am very impressed with the G6 Stealth not sounding like a C130 plane taking off to save military folks in a fire fight and catching fire. Not too bad, Ice Sleet…not too bad!

Okay, I know everyone thinks I’m crazy testing the fan out with 4 games at once. But I wanted you all to see how powerful this fan is. While running 4 games at once, the temps peaked at 60ºC and then back down to 47ºC with the system later running all afternoon after testing. My system is not overclocked or tweaked to anything special.

[Editor’s Note: According to IceSleet, this cooler is best optimized for a single fan, and in their testing it outperformed competitors. They ran in-house tests with added fans, but noted that additional fans did not give any significant improvement in performance. ~Ed.]

The Ice Sleet G6 Stealth is a beefy fan with extraordinary pipes like a classic muscle car. I’m excited to say that the noise level was very much to my liking, with a strong airflow that kept my system cool and quiet. From the sleek designs to the black nickel-plated surface, I am sold on the quality of this product.

This is definitely a great product. I’ve never run 4 games at the same time without a crash due to the high temperature spikes. For my Intel build, I’m sticking to this CPU fan just because I know that I am that guy, stressing out the fan and telling people how well the product does with handing more than an average gaming load.

Go shopping now for your Ice Sleet G6 Stealth CPU fan, and remember: Boltzdameek did it with 4 games and didn’t crash and burn, so you can get even better performance with your gaming loads.