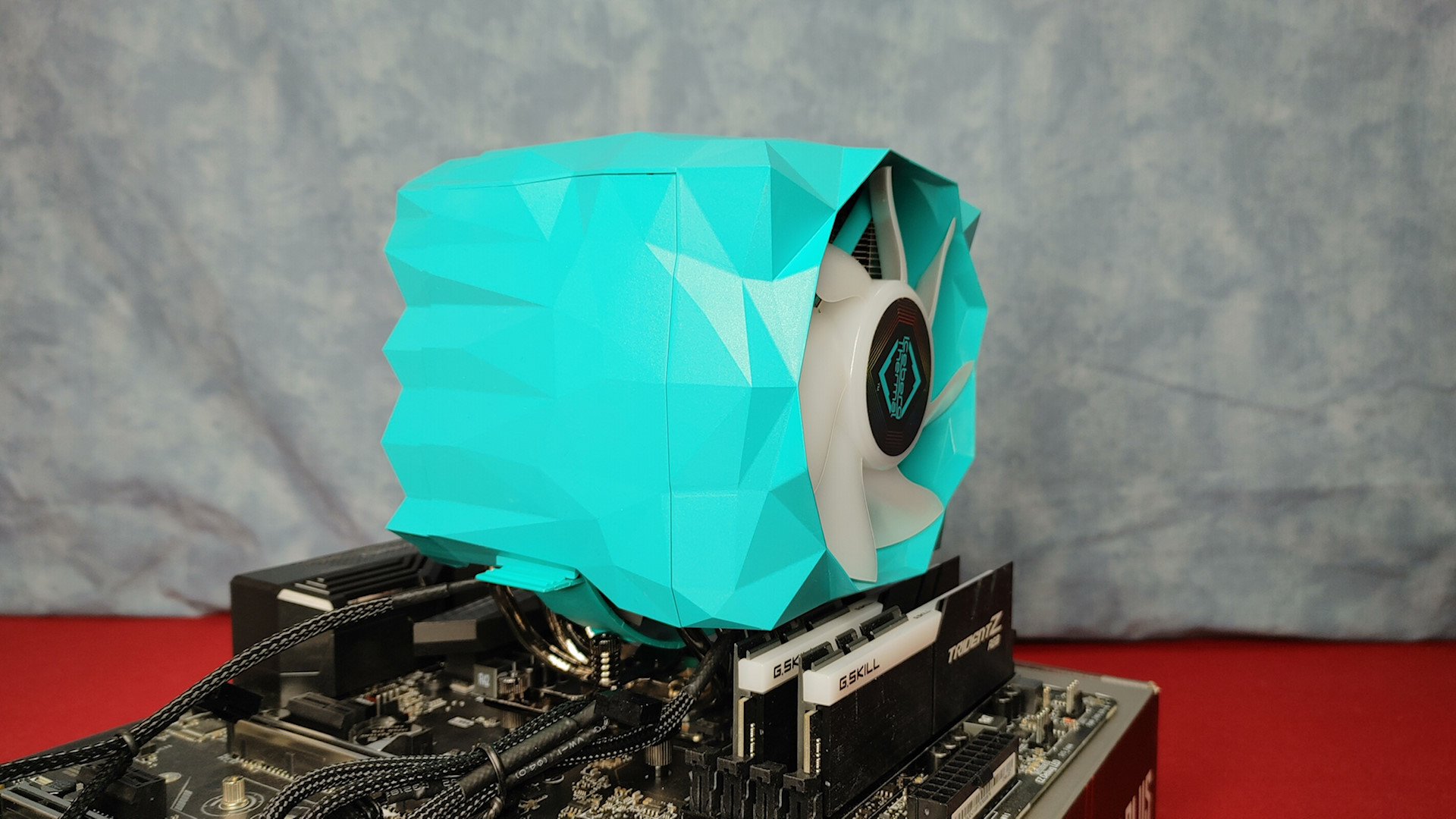 Iceberg Thermal has some new cooling options coming from a team with over 15 years of experience in the industry – like the IceSLEET X7 Dual. The design is bright and bold, and the technical functionality and price point make this cooler an option you’ll want to consider, especially if you want something that fits in with the visual aesthetic of your build.

Compared to other coolers I’ve seen, the Iceberg Thermal IceSLEET X7 is a bright, bold beast. Likewise, the packaging and presentation is different and unique. The cooler comes in a box that you unfold as you open it, with Iceberg Thermal tissue paper covering the cooler, so it feels like a little gift waiting for you. Another thing that’s different is the visual aesthetic of the cooler itself. It reminds me of a glacier, with the the CPU cooler being encased within the icy grasp of the housing. And thanks to RGB options, you can light up the fans and logo at the top of the cooler, thus enhancing the icy-glam look of your build.

The IceSLEET X7 has one 120mm fan in the front and one 140mm fan wedged in between the fin sheets. The fin sheets have 2 mm air gaps. The fan between the two sheets is a unique design. It floats in the middle, while the top housing keeps it in place. The housing itself is made of plastic and clips onto the fins. The side panels of the housing are detachable but help keep the fan in place. The IceSLEET X7 also comes with their FUZEIce Plus thermal compound pre-applied.

I installed the IceSLEET X7 on an AMD motherboard. Using the backplate that came with the original motherboard, I installed the brackets like stacking pancakes: the initial screws to keep the backplate in place, the mount itself, and then the final screws to attach the mount in place with the backplate. Once that was finished, I removed the middle fan to screw a piece to the cooler. That piece will then join the cooler to the motherboard and press the heatsink surface to the CPU. It sounds harder than it us, but it is a process I don’t believe I’ve done before. Once that was all in place, I put the middle fan back in, attach the RGB connector from fan to cooler, and plug in the fan.

One thing I encountered while installing the middle fan was that it did not mount evenly after I installed the side panels. Although everything seemed in place, the bottom part of the fan would tilt towards the fins and brush against it if I turned on the PC/cooler. Consequently, I ended up having to bend the fins a bit wider and make sure the side panels ‘clicked’ in place to hold the fan away from both groups of fins. It would be nice to see something that would help the fins maintain a certain distance away from each other in case something causes the fins to bend.

The Seas Are Green

The IceSLEET X7 can maintain good temperatures under load and looks good while doing so. The light sea green color is much different from other coolers on the market, but if there’s a color theme you have in mind that includes it and RGB, this would make an even greater cooler. Again, I did run into some fan rubbing with the fins, but after getting that sorted the IceSLEET X7 performed very well. At the time of this review, the Iceberg Thermal IceSLEET X7 is priced at $80.99 on newegg.com. With the cooling capabilities combined with looks and price, the IceSLEET X7 is a cooler you won’t want to pass up, especially if it matches your color scheme.