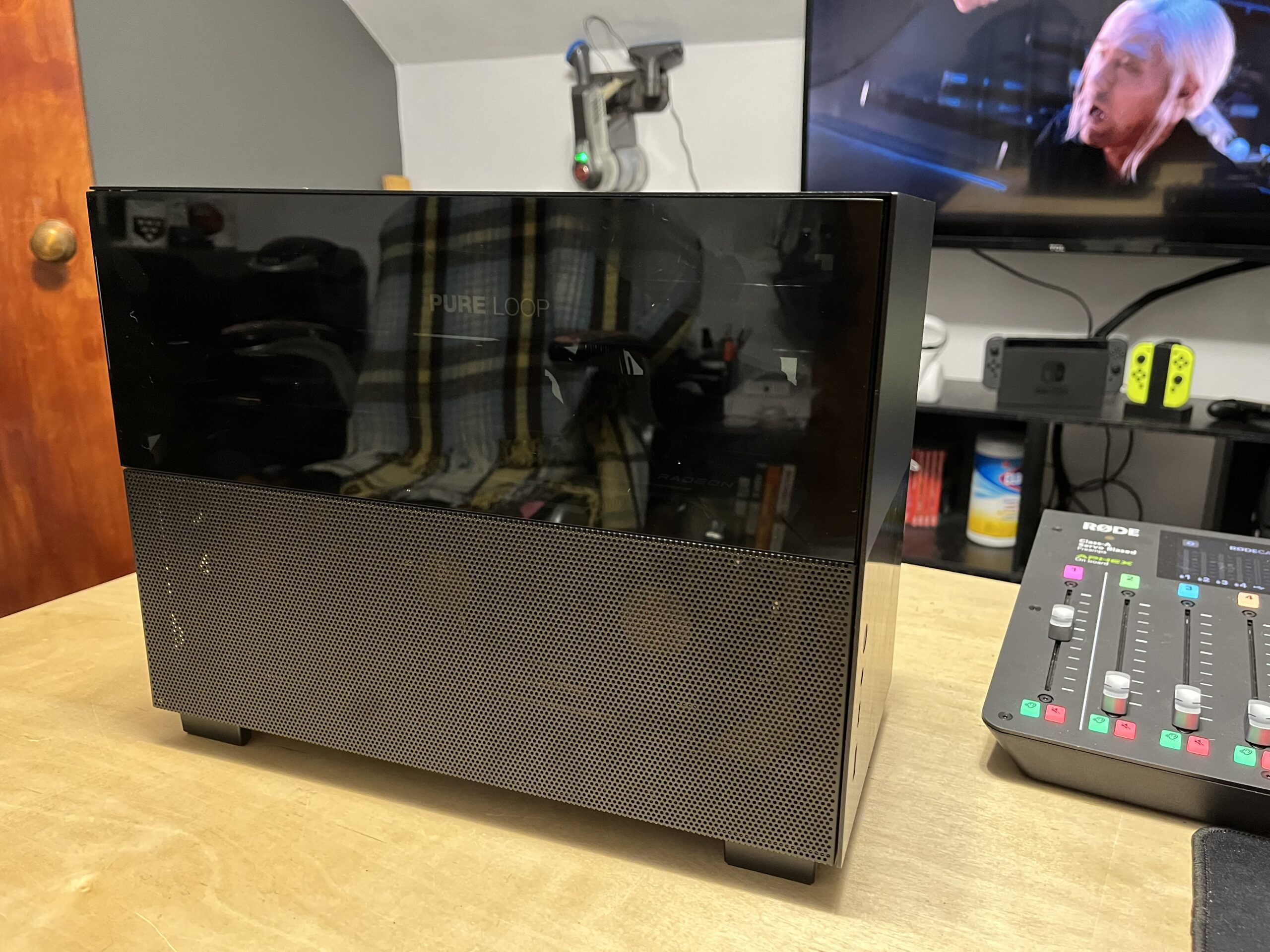 When I finally broke down and bought my 6900XT, I knew immediately that I needed a new case to house it. I loved my NCase M1 but, without heavily modifying my new ~$1500 GPU, there was no way it was going to fit. So I set out to find the smallest case I could that would accommodate my hardware. For me, one of the most important features was that its front panel OI and power switch had to actually be on the front of the case rather than on the top of it. I have cats and, while loved, they are assholes. The Q58 met that requirement and then some, allowing me to build the most power-dense system I have ever had.

Packaging: What’s in the Box

The Q58 is available in white and in black; I received the latter. The two-tone aluminum of the Lian Li Q58 coupled with the two-texture split tempered glass and mesh removable side panels is a very sharp look indeed. And another noteworthy design detail: every panel on every side of the case is removable. This really goes to show that Lian Li designed the Q58 with builders in mind.

The Q58 also includes a PWM Fan and ARGB hub that is mounted on a hinged hatch. This allows it to be moved out of the way; another indicator of the thought that went in to this case. The removable top radiator/fan bracket allows you to mount your radiator/AIO or fans outside of the Q58, and then install it as a whole unit. It accepts two 140mm fans, a 240mm radiator or a 280mm radiator. However, due to how some radiator manufacturers determine their specs, some 280mm radiators may not fit even if you mount “fans-up” as suggested on Lian Li’s product page under the sub heading “flexible cooling” .

The Q58, all in all, is built pretty ruggedly. But the top and front aluminum panels have bent slightly with use, from being pulled off and put back on. These panels are friction-fit with a ball and socket mechanism. The bends are minimal but still disappointing to see. Although, the glass and mesh side panels have fared well with their slide-hinge approach. There are four places for 2.5″ SSDs, one of which is a hot-swap bay near the front of the case. The other is the bottom hatch which sits slightly lower than the rest of the case. This makes it possible to add yet another 120mm fan as an intake if you feel you need more air flow.

Building in the Q58

Building in the Lian Li Q58 is, overall, a pleasant experience although it’s not without its challenges. But Lian Li offers many quality-of-life features to combat the normal issues that you might expect when building in a small-form-factor case. My build was taken from my NCase M1, with the exception of my GPU which was new to this build.

Fitting all of my parts in was pretty simple, though my GPU was an extremely tight fit. The Q58 specs say that it can accommodate GPUs up to 320mm in length. My Power Color Red Devil Ultimate Radeon 6900XT (they need to come up with a shorter name) just barely fit, touching from front to back. And the triple fan design sits just shy of the mesh lower side panels (great for fresh air intake).

Airflow and thermal control in the Q58

Thermals are always a consideration, especially in small form factor builds. I’ve run this build under a handful of thermal configurations. I haven’t landed on exactly what I want to do yet. With the hottest GPU in the 6900XT lineup and a Ryzen 5600X under an AIO liquid cooler in such a tight case it gets pretty toasty with the GPU under load, maxing out at about 80c and the CPU at about 75c. This is with the CPU’s AIO set as an exhaust, using the cases heated volume to pass air along the radiator and out of the case – cooling the case but using toasted air to “cool” the radiator. I think we can all agree this is not an ideal situation for the CPU.

What I find odd is that, when set as an intake, one would assume fresher cooler air across the AIO would result in cooler temps from the CPU, at least. But that didn’t happen. Instead, what I found was that there was too much positive pressure in the case. That created too much resistance on the AIO fans, slowing them, thus causing even higher temperatures on both the CPU and the GPU.

Moving over to air cooling, I replaced the top mounted radiator with two 140mm fans in exhaust and use the Noctua NH-L12 Ghost S1 edition downdraft cooler. This configuration has the GPU on one side of the case drawing fresh air in, the CPU under the Noctua on the other side of the case also drawing fresh air in, and the two 140mm on the top of the case pushing air out. First time around I accidently bought a set of Noctua’s PPC fans for the top; these are industrial grade high RPM fans. The result was a system that was absolutely deafening, but at idle the CPU and GPU sat at 18c (that is 64f which was 4 degrees cooler than my ambient temperature). Again, the problem is that it’s too incredibly loud.

The current configuration is to use two 140mm BeQuiet Silent Wing 3 fans as my exhaust. This results in the CPU and GPU at idle to be at about 32c – 34c and under load the GPU hits 75c and the CPU max out at 71c. And it does so while being only moderately audible. At idle, it’s quiet enough that I can’t hear anything from the system except a little coil whine from the GPU.

I think I will stick with this air-cooled configuration until I get the components and the courage to try a custom liquid loop.

My benchmark this time around was simply to enjoy New World on 4k max settings for …. hours … Ron, our Chief Content Manager, has called New World “the new Crysis”. Maybe in a few years we’ll see “Can it run New World” memes.

At ~$150 USD. the Lian Li Q58 is definitely worth every penny. Especially for those with a current generation GPU but still wanting one of the smallest footprint builds. As we all know, these current gen GPUs are behemoths. The two-tone, two-textured design coupled with its clean lines looks amazing and it has a super-clean modern appeal. The cooling potential is nothing great, but I feel I still have some fine tuning to do to make that better before I can mark it down as a “con” or at least a “meh”.

Fitting a number of air and AIO coolers and an array of SSDs in the Q58 is a sure-fire way to build a highly power-dense PC. However, you should make sure that you are getting a case with a compatible riser for your GPU. There are two riser variations for each color: a PCI-E gen 3 and a PCI-E gen 4. If you run a PCI-E gen 4 GPU on a PCI-E gen 3 riser, you may experience performance issues.