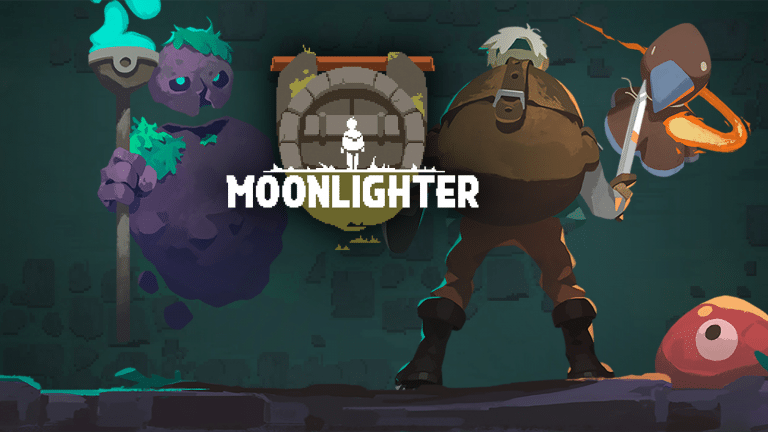 “Moonlighter” is a new take on an old style of a top-down dungeon crawling RPG (think “Legend of Zelda: A Link to the Past”). You are the grandson of Pete, the former owner of the shop Moonlighter. Your quest – to save the world? No! Your quest is to earn a living and keep the old shop open. You are not a chosen hero, you’re a kid scouring dungeons for loot you can sell to restore and upgrade the Moonlighter to its former glory, as it was back in your grandfather’s heyday. However, along the way, you might just have what it takes to save the world too. As the games title and shop’s name suggests, you’ll be moonlighting. You need to manage your shop by day and explore the dungeons by night to find that great loot that might fetch a good price.

The Feel of Moonlighter

The game manages to be a new take on an old style without feeling lacking or clunky. Its pixel-art style works out really well when coupled with its slightly muted color palette. Many modern pixel-art style games try to add a lot of bright opposing colors in a given sprite to try to exaggerate detail. The visual art style uses more of a softer palette of complementary colors. These work to show the player the intended detail while also giving the various sprites in the various levels and over-world a cohesive feel, not just making you think “yes, this sprite belongs to this dungeon,” but that the sprite belongs to this game.

The controls felt pretty decent, though they did take a little while to get used to. At first it felt like there was input lag, but as time went on I quickly became accustomed to it. By the time my second stream of the game rolled around I felt comfortable.

Focusing on the shop, the game’s mechanics can be pretty deep. You place items on your store shelves and give it your best guess as to a fair price for those items. Price too low, and customers’ eyes will light up with visions of money as they buy the item. If you see this, odds are your customer is ripping you off and they’re making out like a bandit. On the other hand – if you price an item too high, the customer might not buy it. If they do, they will feel like you’re the one ripping them off, and they will be less likely to purchase from you in the future.

Of course, when you find that sweet spot it’s money in the bank, but don’t flood the market. If you flood the market demand for an item goes down and so, too, should its price. This aspect of the game really is the age-old tale of supply and demand. As you get more advanced, sell better loot, and upgrade your shop, you’ll need to watch out for shoplifters. If you don’t stop them in the act it can cost you a lot of money. Money that can take nights of dungeon crawling to make up.

On the subject of dungeon crawling: this is where you’ll spend at least half of your time. Dungeons are randomly generated every time your character enters them. This begs the question: if you’re not in the dungeon, does it even exist? While the dungeons are built almost as if they want you to complete them and get their precious loot, the dungeon guards and monsters act as an obstacle – contrary to the feel of what the dungeon seems to want… I wonder who put them there.

Battle mechanics (as I mentioned earlier) felt a little slow at first. I’m still not sure if it was a matter of input lag or battle timing. The first few hours of dungeon crawling were hard, but by the second time I streamed the game I had enough of a solid feel for the timings and attack patterns that I could hold my own. Boss fights are more difficult, but that is a matter of player ability. The dungeon bosses are huge and have the ability to attack you anywhere in the play area. It comes down to patterns and player equipment to win over these colossal beings.

Leaving a dungeon happens in one of 4 ways: die and lose everything; use the Warp Pendant (costs gold) to exit the dungeon with whatever loot you have on you; use the Warp Stone (costs more gold) to leave the dungeon with your loot and you get to re-enter at the point you left from; or (if you’re good) kill the boss and exit with your loot without having to pay gold to do so.

My Gripes with Moonlighter

I have very few complaints about this game. Really the only issue I had was occasionally in the desert dungeon once I got to floor 2. Occasionally, none of the doors would trigger – leaving me stuck. Stuck in a room and could not walk into the next room. I would then have to warp out of the dungeon (which cost me time and money) and fight my way back in.

This may have been fixed in the most recent update

When thieves steal (or attempt to steal) something you’ve stocked but never sold before, you’ll have to go through the process of repricing it. Luckily, if you’ve sold something before and list it again, it automatically takes on the last sale price you had.

“Moonlighter” is beautiful in its simplistic art style. It is available on the Windows Store, Steam, GOG, PS4, and Xbox One. I hope to see it released on the Switch and Vita. “Moonlighter” plays well and allows you to set it down and come back later. Doing so won’t leave you feeling like you need to start over.

I highly recommend “Moonlighter.” The game will run you about $20 USD as of writing this and it is absolutely worth it. I hope to see more from the developer DigitalSun and publisher 11bitStudios. Check out the game’s website for details. http://moonlighterthegame.com/