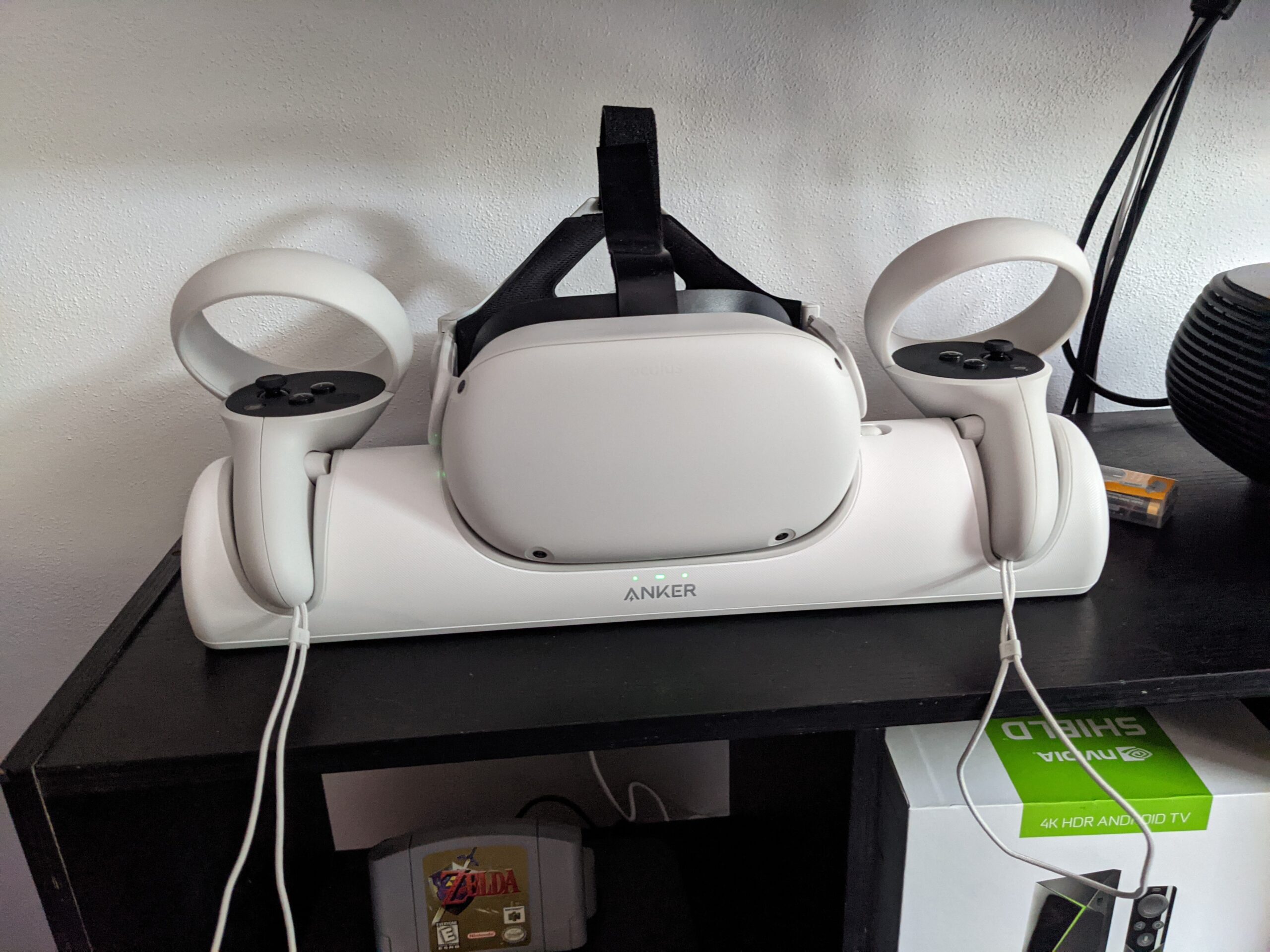 The Oculus Quest 2 is a standalone VR system with an entry-level price tag, great hardware, constant software updates, and seemingly limitless accessories. There is a major caveat, however: Facebook owns Oculus.

The Oculus 2 system comes in two variants: 64GB and 256GB version ($299 and $399 respectively). The unboxing is fairly simple: the headset, the controllers, and a USB-C cable for charging all come neatly packed.

How does the Oculus Quest 2 work?

The Oculus Quest 2 operates as a stand-alone system with its own OS (Android) and UI, as well as its own game store. There are some fun gems to play there; my current squeeze is Demeo, a multiplayer “table-top” RPG in VR. The real magic happens when you connect the Oculus Quest 2 to a PC. Doing so allows you to up the resolution of games (I think this happens akin to AMD’s VSR). Oculus also has a PC application for the devices, and a game store there as well. Some games purchased in the stand-alone store will carry over to the PC store, but I can’t promise that all of them will.

You can connect to a PC with a long USB-C cable (sold separately); any quality cable should work. Or, with v28 and v29 software releases, you can pair to your PC wirelessly and enable 120Hz refresh rates. However, upscaling the resolution and refresh rate will require a more “beefy” PC setup. For best wireless performance, I would suggest a very strong home network and a Wi-fi 6 access point. This gives the cleanest wireless play and the ability to “cast” your play to a TV to share your play with others. PCVR with the Oculus Quest 2 is great because you can also use Steam VR and access your full Steam Library. Steam VR games play as VR as expected and non-VR games play in a sort of “movie theater” mode.

I bought into the Oculus Quest 2 because it was affordable – but it wasn’t long before I found a plethora of accessories and they found my wallet. One of the first accessories I purchased was a charging station and stand developed by Anker in conjunction with Oculus. It allows you to charge your headset and both controllers at the same time while looking stylish and organized.

Another thing I picked up was an after-market head strap, since the stock strap is not very comfortable. Also, Oculus does sell an upgraded strap with a battery pack built in to extend your play sessions. Now, the one accessory I am most excited about is a set of lenses from VR Wave for the headset that is built with my eye prescription, so I can play without needing glasses. These haven’t arrived yet as of writing this, but I have heard rave reviews about them.

The One Major Caveat

Now for the 900-pound gorilla in the room. As I mentioned earlier, Facebook owns Oculus. Therefore, you are required to sign up with a Facebook account when you set up your Oculus 2 system. Some users have claimed that they ended up in “Facebook Jail” or were outright banned from the platform, subsequently losing access to their Oculus account and all purchases made there. These claims are unsubstantiated, but it is a possibility regardless.

Is the Oculus Quest 2 worth it?

If you can live with that gorilla, the Oculus Quest 2 has been my favorite purchase in a long time and if you pace yourself with the accessories it is also extremely affordable.

There were also claims of users losing access to their Oculus accounts and purchases when deleting their Facebook accounts, or trying to link to an already-deleted Facebook account. These issues primarily affected the home-user versions, especially with multi-player games. This was supposedly remedied since then, but as of this writing, it is unknown if it is still happening. At this time, we are unable to confirm any further complaints regarding users getting banned for the multiple device/log-in issues.

The alternative is to spend the money for the business/enterprise version, since it doesn’t have the Facebook log-in requirement. However, as of this writing, that system version costs close to $800 and requires and additional software subscription fee of $180 to allow sideloading apps, since the enterprise/business version of the Quest 2 cannot natively load apps from the Oculus app stores. ~ Raven Knighte, Ed.)