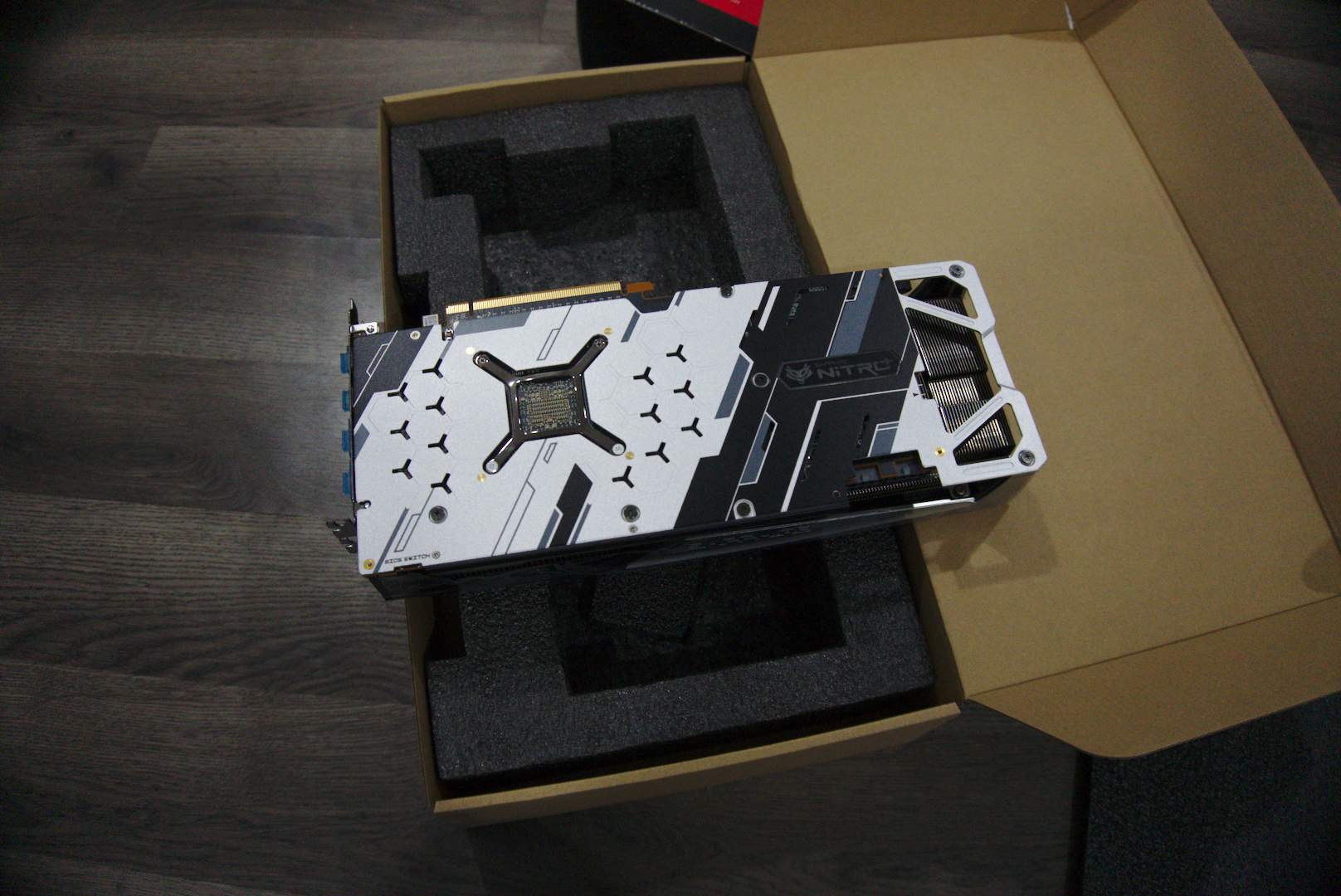 [Hardware Meta is a participant in the Amazon Services LLC Associates Program, an affiliate advertising program designed to provide a means for sites to earn advertising fees by advertising and linking to Amazon.com. This article may contain affiliate links.]

If you’re a gamer focusing on 1440p gaming and still budget minded, the Sapphire Nitro+ 5700XT may be worth taking a look at.

The Sapphire Nitro+ 5700XT comes well packaged in an informative (if not a little flashy) sleeve that encases the cardboard box. Inside is custom-formed rigid black Styrofoam with very little wasted space. My box arrived with a big boot print on it, but the card survived so I count that as a win. All of the documentation for the 5700XT appears to be printed on the box sleeve.

Looking at the Sapphire Nitro+

The Sapphire Nitro+ 5700XT looks amazing with its silver and black aesthetic metal back plate and what feels to be all metal housing. For the RGB lovers out there, there is a plethora of addressable RGB LEDs that can be controlled from Sapphire’s own Trixx software. Alternatively, the card can be connected to your motherboard’s ARGB header.

This 305mm long card is cooled by a triple fan design, with the center fan spinning in an opposite rotation. This is intended to improve airflow and reduce vibration. The Sapphire Nitro+ 5700XT is configured with a 7+1+2 phase VRM and powered by dual 8-pin power connectors, and can consume up to about 250w (stock). The PCB also features a dual BIOS switch for changing between performance and silent modes.

After I did my initial testing, I played around with overclocking in the 2020 Radeon settings. I was able to push the GPU boost clock to 2140MHz and run a few benchmarks without a crash, though the increase in FPS was marginal compared to the heat produced. I also tried my hand at undervolting and managed to maintain FPS with my stock results while only consuming a max of 200w of power and saving me nearly 10c on temperatures and of course lower fan noise.

Some things to note: the Trixx software also has a feature to check your cards fan health. So if you have a fan fail, you can submit for a replacement by Sapphire. This allows you to replace the faulty fan with a working one with minimal effort – one screw, and snapping in a new fan. This should save you the down time of having to RMA your GPU should a fan fail.

At the time of writing this, participating vendors will also email you a code for AMD Rewards upon receiving your Sapphire Nitro+ 5700XT. This reward code will earn you two games: Monster Hunter World with the IceBorne DLC, as well as a copy of the Resident Evil 3 remake. Additionally you may also get a code for 3 free months of XBox Game Pass.

For testing, I compared the Sapphire Nitro+ 5700XT against the Gigabyte Radeon Vega 56. I wanted to show what a person could expect if upgrading from a previous generation Radeon card to this.

While both cards ran fine at 1080p, the Vega actually consistantly performed a little better in Farcry 5. However, at 1440p is where the Sapphire Nitro+ 5700XT really starts to shine. For anyone with a GPU budget of about $430 – $460, the Sapphire Nitro+ 5700XT is well worth it. I cannot quite put in to words the sheer difference in visual quality. When you compare visual performace, 1440p is over 1080p at the same settings, and to be able to play at 75+ FPS (which is within the Freesync range on my displays) makes for a gorgeous, smooth experience.