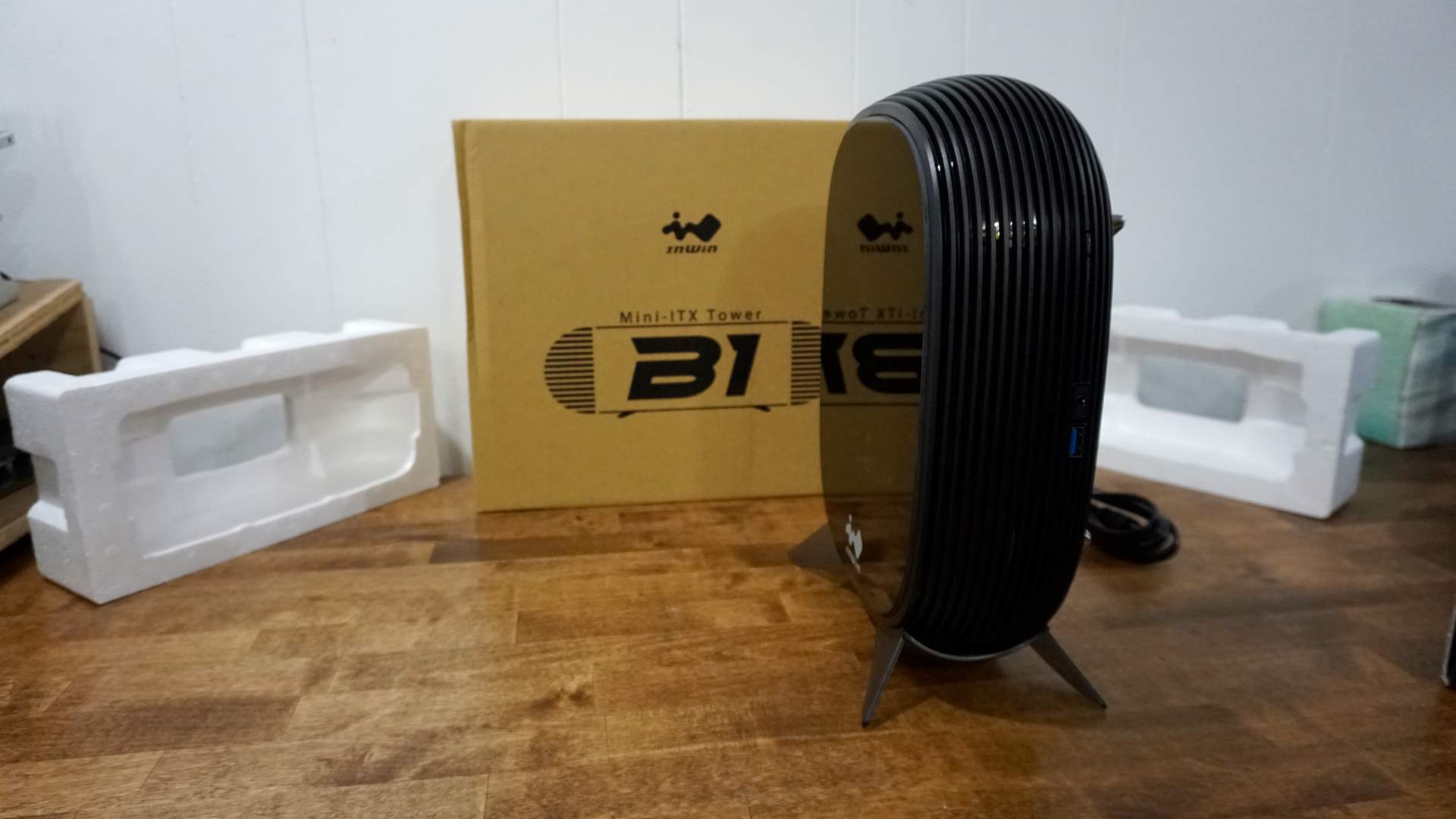 The B1 by InWin: my wife says it’s cute

InWin strives to think differently. From the cloth-and-plastic, clothes hamper-esque Alice, to their robotic transforming H-Tower case, they have a knack for ‘different’. So when they reached out asking us to take a look at the B1, I was intrigued.

The B1 is different. It’s the first “APU Only” m-ITX chassis I’ve ever built in. I thought with Cyberpunk 2077 having just released, I might even do some light modding. As I began imagining the B1 in CyberPunk yellow, it started reminding me of something I’ve seen before. Then it hit me. “Weebo” from Robin William’s 1997 film Flubber (good luck unseeing it). It’s not a bad thing, though. This is the first computer related “any-thing” that has come across my desk that my wife has shown any interest in. According to her it’s “so flippin’ cute”.

In true InWin fashion, the unboxing experience of the B1 was par for the course. Nothing extravagant, although they did send an InWin shirt, and the B1 was very well-packed. That’s a good thing, too, as I am starting to fear our FedEx team is getting tired of delivering here almost daily.

In the box was, of course, the B1and a plastic pouch with some screws, zip ties (not tweezers), and a couple felt stickers — presumably to cover the case feet mounting holes, should you decide to remove them.

Building in the B1

Building in the B1 might be the easiest build I have ever done inside an m-ITX chassis. Normally I have to battle “big hands – little enclosure”. Not this time. The plastic and tempered glass B1 comes with a 200w 80+ Gold certified PSU. I am not 100% sure of the form factor, as it looks like a server PSU but smaller. The PSU is also the chassis air intake with an 80mm exhaust fan on the other end. The intake is filtered but the exhaust side is not; while you could flip it to be another intake, which helps with the cooler, for long term use we wouldn’t suggest it.

Removing two screws is all it takes to open the B1, exposing its innards. Simply take your motherboard i/o backplate and pop it in, then lay down your fully assembled motherboard and secure it with four more screws. Plug in your front panel USB 3 header and your front panel audio, the pre-installed SATA cables and your mainboard power and CPU supplemental. After that you can place the top back on and lock it down with the aforementioned two screws.

Adding storage is easy. The B1 comes equipped with a SATA drive ‘backplane’. Those two SATA cables we connected earlier interface with breakouts for 2 2.5″ SATA SSDs on the under side. So flip the B1 on its head; you’ll notice the feet are attached to a cover. Remove the 4 screws and the cover. Here you can see the housing for the 2 2.5″ SATA SSDs. But if your m-ITX board has an M.2 on the back, you’ll see that one of the SATA drive bays has a cut-out, allowing you to access the m.2 interface on the back of your motherboard. The placement is fairly standard, so it lined up perfect for us, though your mileage may vary.

Here’s the kicker: The B1 does technically support CPU coolers up to 60mm in height. I found that the Wraith Stealth (the 2400G’s stock cooler which comes in at 55mm) does technically fit. However, the remaining 5mm of clearance to draw air from, in my opinion, was not enough. But with a super low profile cooler like the Noctua NH-L9a, cooling should be plenty sufficient. I also noticed some variation in cooling performance on both coolers when I took the 80mm chassis exhaust fan and flipped it to be an intake. It did help with cooling — but this is then an unfiltered intake and, over long term use, would likely accumulate a lot of dust in your system.

For testing, I ran our system through a gamut of benchmarks and games with both the Wraith Stealth as well as the Noctua NH-L9a Chromax. I also ran these tests with the chassis fan set as an exhaust (stock configuration) as well as an intake.

In synthetic benchmarks like Time Spy and Firestrike, the results were still about the same, with the Wraith Stealth failing to complete AIDA64’s heat soak. However, with the Noctua NH-L9a having much more room to breathe, it performed great. Audibly, I felt the PSU fan was a little noisy, though my wife — whose hearing is typically better than mine and is generally more picky about things like that — felt that the noise level was barely noticeable and wouldn’t be heard in an HTPC setting when the system is not a mere few feet from your face.

The Good the Bad and the … Cute

The B1 has possibly only one negative; there is no room for a GPU should you want to upgrade in the future. If you don’t want to use the integrated GPU in either an AMD APU or an offering from Intel, the B1 is NOT for you.

With a new APU rumored to be on the horizon, if you are looking for a living room HTPC or a Steam-in-home-streaming device, this might just be what you need. It is damned easy to build in. It has the wife-approval factor of being “cute” and not too noisy, even under load.